Our investment group is also looking at the figures. Investment decisions are quickly made. 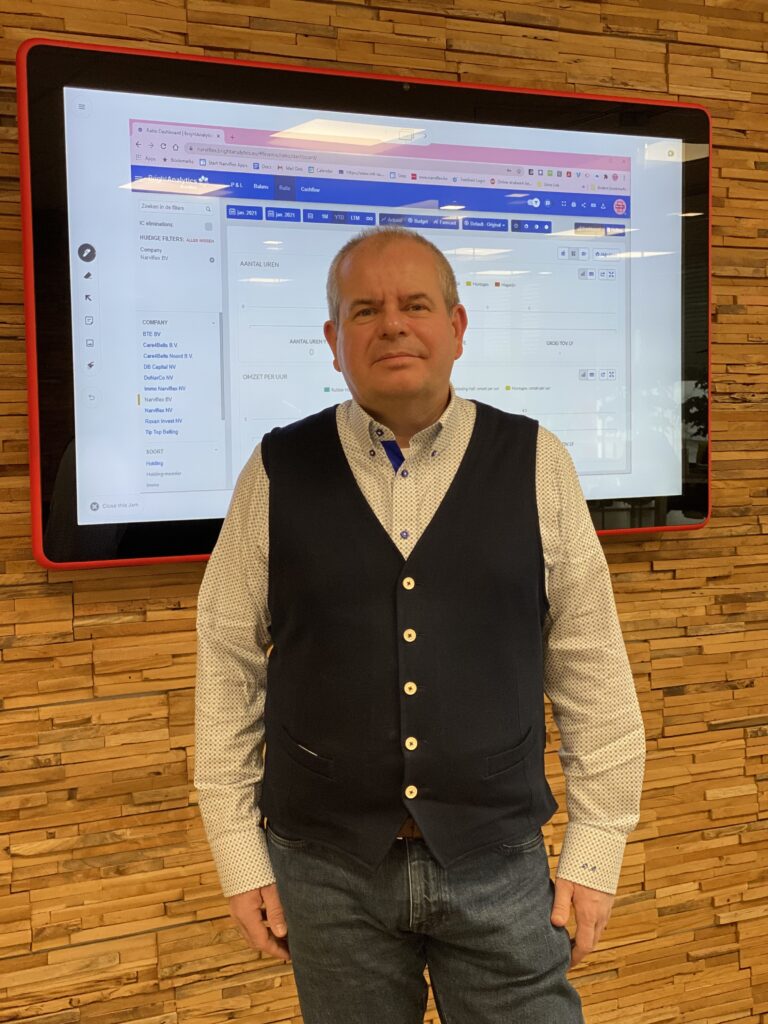 "The tool is so visually appealing that you don't need any financial knowledge to draw conclusions."
- Dirk Berden, CEO

To finally get real-time reporting on the performance of the various entities and the group: that’s what Narviflex was looking for when it chose BrightAnalytics. Barely a month later, they have – as they call it – a helicopter view of the entire company at the push of a button. And that does not include intercompany transactions.

Until recently, Narviflex – producer of conveyor belts, industrial plastics, rubber and plastics – still used spreadsheets to chart the performance of the company, its six sites and ten entities. That happened ad hoc, a few times a year. “However, as our organization grew, so did the need for real-time reporting,” says CEO Dirk Berden. “On top of that, we also needed to consolidate. Because of that, we started to look for a reporting tool. It was Dovesco, the investment group we are part of, that recommended BrightAnalytics to us. Several of its companies were already working with the software.”

BrightAnalytics organised a virtual introductory meeting in full lock down, and barely a month later the first reports were rolling out of the system. “After they assessed our needs and mapped out which companies and systems needed to be connected, they set up the tool for us. That went very smoothly. Today, we can get near real-time figures from any company thanks to the software, both figures from the group and from certain clusters in the system. A cluster, for example, consists of all Belgian entities or all operating companies. We can easily filter intercompany transactions from the results, so that our group turnover is more realistic than before.”

BrightAnalytics is not only used by the chief accountant and the two CEOs of Narviflex, but also by Dovesco, according to Dirk: “This is useful when we need to make investment decisions, for example. In the future, I want to extend access to branch managers even further. Visually, the tool is so attractive that you don’t need any financial knowledge to draw conclusions from it. In other words: a manager does not have to dig out a consolidated balance sheet or profit and loss account, but sees at a glance, for example, today’s turnover compared to the previous year, presented in a clear graph.”

In the same manner, Narviflex keeps an eye on the labor costs and the expenditure for tools and work clothes. “For example, if we see a spike in labor costs, we can find out where it is coming from,” says Dirk. “Was there a project that had to be finished quickly that required night or overtime work? We can also compare the turnover of a product group with the number of hours worked in the production hall to make those products. That way, we can see whether there is a loss or gain in productivity, and whether the product group is sufficiently efficient.”

To be able to create these kinds of reports, BrightAnalytics must of course communicate with various databases. “Sometimes it’s about cloud based solutions, sometimes it’s not. The wage costs, for example, come from the social secretariat, while the production data can be found in SAP.

Moreover, not all entities use the same accounting software. BrightAnalytics centralizes this information and presents it in a user-friendly format. As such, we have a clear overview of the entire company today: a lot faster than how we used to work, and with a much smaller chance of errors.

Dirk is also enthusiastic about the collaboration. “Questions are answered the same day. Our contact person has an enormous amount of knowledge and expertise. If we get stuck, he usually immediately knows where to look. When we recently took over a company, the connection with their cloud-based system was made within 24 hours. We had barely taken over the company when we could already pull in the data. I think that’s fantastic.”

Euroglas
Before we had a single static page in Excel that we couldn't manipulate. Nowadays at our monthly meeting, we can all analyze the figures in detail. Amazing!
Read more

J. Cortés
Thanks to BrightAnalytics, all figures are centralised and reported in one place. Analysing is easy, comparing is simple.
Read more

Libeert
Every night, the data from Libeert is uploaded by BrightAnalytics. This allows the company to follow the sales evolution every step of the way.
Read more

The benefits of BrightAnalytics according to Narviflex :